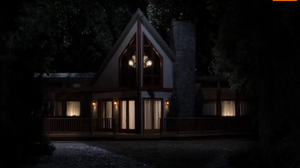 The Thornhill Lodge is located in a secluded wooded area near Rosewood. "A" used it as a meeting place with the Liars.

A DAngerous GAme The Lodge emerges for the first time when Spencer invites Emily, Hanna and Aria to a party, which turns out to be a set-up and a meeting place with "A." Later in the episode, Hanna, Aria, and Emily sneak up on Mona. Shana locks the building from the outside and Wilden sets the lodge on fire, trapping the girls and Mona inside. We see someone in a red coat land her plane on the landing strip. She pulls the liars out of the burning lodge. Hanna looks up and it is Alison DiLaurentis. As they are coming to, Mona runs over and asks if anyone else saw her, exclaiming that it was Alison that saved them from the fire. Hanna and Spencer both confirm that they saw her too.

'A' is for A-l-i-v-e Toby watches a fireman pull a red coat out of the debris the morning after the fire at the lodge. Spencer and Toby later go back to look for clues. While they where searching, Spencer sees a figure who quickly gets away before they could catch him/her. Face Time  Melissa reveals to Spencer that she sent Jenna and Shana over to the lodge in order to find out who the girls were going to meet because they were suspicious that it may have been Alison, and that Wilden showed up and he started the fire.

The Liars breaking in

The Backdoor before somebody locked it

The Liars before the fire spreads inside

The Thornhill Lodge on fire!

The piano after the fire

Spencer investigating
Add a photo to this gallery

Retrieved from "https://prettylittleliars.fandom.com/wiki/The_Thornhill_Lodge?oldid=569036"
Community content is available under CC-BY-SA unless otherwise noted.