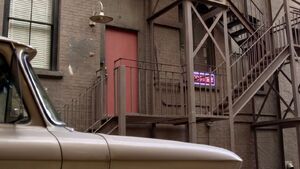 Toby's Apartment is located directly above The Brew. He is often seen there with Spencer. Toby moved here after moving out of The Cavanaugh House. Since purchasing The Brew, the loft is now owned by Ezra Fitz.

It Happened 'That Night' Over the summer, Toby moved out of his house and got a loft above The Brew. He is living there rent-free while he renovates the place, including the plumbing which is out of order. Misery Loves Company Emily goes to Toby's loft early in the morning, after she opened up The Brew. She is there under the pretense of waiting for the plumber, but what she really wanted was to get Toby's keys for Spencer. Spencer is planning a surprise anniversary dinner and needs his keys to set it up in his apartment later on that day. Not seen on screen, Spencer goes to the loft, sets up the dinner, then discovers Toby's fake Radley Sanitarium ID badge, indicating that he is working with "A." At the end of the episode, after Spencer confims Toby is "A," she goes to his apartment and cries on his doorstep begging him to talk to her. Toby was not inside; however, Mona was, and seemed to enjoy the meal Spencer had prepared while listening to her cry outside. Out of Sight, Out of Mind Hanna and Emily investigate in Toby's apartment while he's not there, and find an 'E. Lamb' parking pass for Radley Sanitarium inside a motorbike book that Emily gave him for his birthday a while back.

Face Time Spencer shows Toby the address she found for Dr. Palmer, the man who was treating his mother at Radley. Toby doesn't want to waste any time following this lead and leaves for Saratoga right away.

Spencer crying outside Toby's loft
Add a photo to this gallery

Retrieved from "https://prettylittleliars.fandom.com/wiki/Toby%27s_Apartment?oldid=941295"
Community content is available under CC-BY-SA unless otherwise noted.