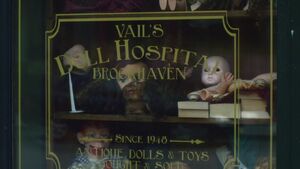 Vail's Doll Hospital, located in Brookhaven, Pennsylvania was introduced at the end of "Father Knows Best". The girls are led here by a tip from Jonah, Vivian Darkbloom's informant. Some messages from "A" originated from this vicinity.

The Liars are lead to the doll hospital while trying to figure out what Vivian might have wanted in Brookhaven. They see the owner -- an older woman named Martha -- opening the shop. They ask if anyone had ever bought a voodoo doll (the same as one Alison received), but Martha says they don't sell those. Inside they speak with a creepy young boy named Seth, who apparently has a "gift" that allows him to see things that haven't happened yet. He tells them that Alison was in the store two summers ago looking for a voodoo doll. He said he warned her against it, since a man and a woman with dark hair were trying to hurt her. Martha sends him upstairs, but on his way out he says he's sorry for what happened to Alison, specifically citing her cause of death. The girls are visibly freaked out.

Later, Hanna, Spencer and Emily go to the shop again, to show the video they had uncoded from A's phone to Seth, thinking he might help them. This time, they find the door of the doll shop unlocked. The enter, calling out Martha's name. They find a box full of the voodoo dolls Martha claimed not to sell. The lights go out and a doll's voice begins chanting "Follow me, end up like me" on a loop. Instead of running away, they open a cupboard and find a bloody blonde doll half in a grave holding a shovel - recreating Alison's death! Things begin crashing to the floor around them, so they run and get out moments before the entire shelf comes crashing down.

After the girls leave, Martha is seen sitting on the floor of the basement telling "A" that while she kept her deal, the giant mess she has to clean up was much more than she bargained for. However, "A" hands her an envelope full of cash and a lollipop to suspicious looking Seth as compensation.