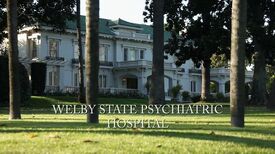 Charlotte DiLaurentis was sent to Welby after she was revealed as "A" in "Game Over, Charles". Later in "Hush, Hush, Sweet Liars", Alison DiLaurentis admitted herself into the hospital with the help of Emily Fields. Her husband, "Elliott Rollins", "took care" of her there until he later died in an accident involving the Liars, and she was later released. After admitting to having accidentally murdered Charlotte, Mona Vanderwaal was admitted to Welby for one-year of heavy counseling before her release in "'Til Death Do Us Part."

Interim Welby State Psychiatric Hospital is seen 3 months after the closing scene of "Game Over, Charles" in "5 Years Forward". Anne Sullivan invites Alison DiLaurentis and her brother Jason to visit with Charlotte for the first time. The hospital is shown to feature a serenity garden with several benches, a stone birdbath, dotted with green shrubbery and surrounded in a grove of trees. Charlotte is there reading a book, before getting up to hug both of her siblings. Of Late I Think Of Rosewood

Alison visits Charlotte in her room at Welby. The room is of moderate size, with one bed and a large window, a leather chair, a small dresser, and a lamp. Charlotte is worried that The Liars won't forgive her, but Alison assures her that they will. Later, Charlotte is released from Welby due to the Liars' testimonies. Hush, Hush, Sweet Liars Believing herself to be crazy due to seeing "hallucinations" of the dead Darren Wilden (really Elliot/Archer in a mask) and Jessica DiLaurentis (really Mary Drake), Alison checked herself into Welby.

A Small Town...The moment Marian Larsen sees the patrol car stop outside her house, she feels a shiver of foreboding. The news is even worse than she feared. Marian's husband and young daughter have been in a snowmobile crash. Dan is paralyzed and Laura is dead, her body broken on the icy ground...A Chilling Secret...Friends and colleagues in Marian's Minnesota hometown rally around to try and ease her grief. But soon there are more horrible accidents. Then the rumors start--that these are not coincidences at all, that someone is picking off victims one by one. And as winter deepens, the search for answers will reveal a killer whose blood runs colder than the blinding snow. . .(Source)

Retrieved from "https://prettylittleliars.fandom.com/wiki/Welby_State_Psychiatric_Hospital?oldid=1022963"
Community content is available under CC-BY-SA unless otherwise noted.